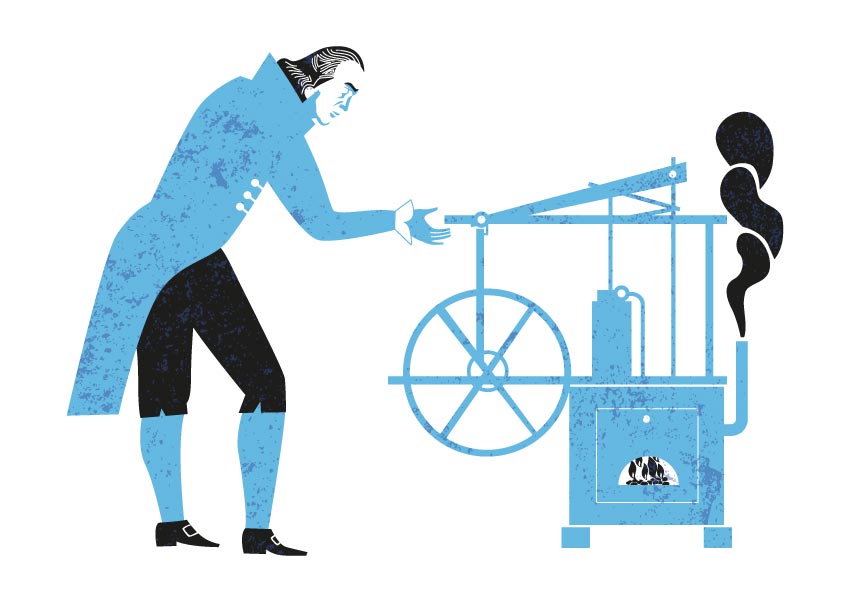 Questions about process management are asked again and again, many are answered by searching the internet, some remain unanswered or leave even more questions ...

Therefore, we have decided to give a little help and create a process management definition.

Within the framework of holistic approaches, not only technical but also organisational questions are considered.

On the History of Process Management

Production and service provision in general is often seen in the context of industrial enterprises. The products from industrial manufacturing have changed our environment to some extent. These include, for example, cars, computers, mobile phones, medical diagnostic equipment and many other digital products.

However, it's not the individual products that are responsible for this change, it is much more the production methods that have determined our progress. Advances in information technology and developments in factory and transport systems have had a major impact on the course of history. The development of infrastructure alone after the invention of the internet has changed processes and process management extremely.

Our behaviour has changed dramatically with the use of apps on mobile devices such as smartphones or tablets. Price comparison engines, search algorithms and fitness and health trackers or navigation systems are all integrated into process management. These are just not visible to the user at first glance. But they are the basis for information that we receive when using these apps.

From Craft to Process Management in the Factory System

Pre-industrial society was characterised by an agricultural and artisanal way of life. The concept of division of labour had not yet been invented, social developments were basic prerequisites for an industrial revolution. This started in Great Britain, which had already drawn up the Magna Carta in 1215: a first definition for civil rights as a declaration of fundamental rights, making personal freedom and legal security possible. The introduction of patent law in 1624 laid the foundation for protecting inventions and new processes, which in turn created the possibility of receiving inventors' wages.

Inventiveness was also of great importance in the development of new types of machinery in agriculture, allowing people to produce sufficient food and had the knock on effect of making food more affordable.

In the course of time, the release of agricultural workers through mechanisation also led to an initial division of labour, this was also reflected in an increasing number of homeworkers. These mostly received raw materials provided by entrepreneurs. These were usually wool or flax, which were spun and woven into finished products.

This system was first developed in Great Britain, yet we also know this from was adopted by peasant families in the Black Forest area of Germany, who crafted cuckoo clocks in the winter using home labour.

In the course of time, a manufactory system developed - especially in Great Britain. This was characterised by a spatial concentration of work and thus also of labour. The first mechanisations and standardised work processes appeared. Another production factor was added to manual labour: capital.

Buildings and machines required capital to drive mechanisation. Most of the capital came from the owners of the farms. But they also made their money available to the inventors of technical machines and production processes.

The Development of the Raw & Sales Markets

A favourable factor for the development of industrial (process-controlled) manufacturing in England was also its status as a colonial power. Important raw materials could be procured cheaply and sales markets could be developed quite easily.

The first signs of limits to growth became visible. The steady growth of the British cotton industry inevitably led to rising wages. Soon, cheaper Indian competition could no longer be withstood.

Existing means could no longer cope with this cheap competition. This was the impetus for investments to improve productivity. The development of mechanical spinning machines and looms could no longer be stopped.

All machines from this early industrial period were powered by water power. It was not until the invention of the steam engine by James Watt in 1764 that the demand for energy could be satisfied. The era of steam engines had dawned.

At the same time, improved processes for producing wrought iron were developed. This made it possible to manufacture machines, steel products such as rails and bridges from iron.

The upswing and technical progress of that time also led to the development of new industries. In addition to the textile industry, a chemical industry, food industry and much more developed.

The infrastructure necessary to supply people was ensured by the first railway network and shipping canals.

In the course of this industrialisation, there were also negative excesses and exploitation of workers. Friedrich Engels clearly described this in his manifesto "the situation of the working class in England" as early as 1845.

Do You Have a Question?
Book a Free Web Meeting with One of Our Experts

Mass Production Appears on the Horizon

The next step in the industrial revolution was initiated by the invention of the electro-dynamo. Werner von Siemens received his patent for it in Munich in 1866. The industry experienced a real boost with the invention of Rudolf Diesel.

He was granted a patent for the combustion engine in 1892. The use of petroleum instead of coal and the use of electric drives multiplied industrial production. This was also the initial spark for the automation and rationalisation of work processes. Process management was born.

Frederick Taylor published "The Principles of Scientific Management" in 1895. A scientific work that dealt with the rationalisation of work processes. His concept of breaking down work processes into planning and executing activities is still valid today. The basis for efficient process management was created by analysing and standardising work processes.

The Invention of the Assembly Line

The increasing population in the USA demanded that food production be industrialised to meet demand. With the introduction of conveyors in the slaughterhouse in Chicago USA, assembly line production was made possible for the first time. This was the next step towards further optimisation of processes.

The increasing demands on the quality of mass production was made possible by the use of numerically controlled machines,

The development of computer technology and the construction of the first program-controlled calculating machine by Konrad Zuse in 1936 was a milestone. The integrated circuit was developed by Jack Kilby at Texas Instruments in 1958. He received the Nobel Prize in Physics for this in 2000. This was preceded by the development of the transistor at Bell Laboratories until 1947.

The use of numerically controlled machines made further process optimisation possible. It was now possible for the first time for one employee to operate and monitor several machines. This was also made possible by the development of software planning and control systems. So-called PPS software was first developed in the early 1960s.

In parallel, there were developments of software that could support development and construction. These were systems described with the abbreviations CAE and CAD. Based on this, CIM concepts were developed. These enable the direct exchange of data between development, design, production and administration.

Requirements for the provision of data and information across an entire company led to the development of ERP software. These have been continuously developed from the first ideas of material resource planning to machine planning until today.

In the meantime, there are many hundreds of ERP software systems on the market for every conceivable requirement.

ERP software evaluation and independent ERP software selection are services that have arisen today because the variety and complexity of ERP systems has increased greatly. In order to use complex ERP software successfully, process management is crucial. Knowledge of organisational models and process descriptions is a prerequisite for evaluating an ERP system to see if it meets the company's requirements.

The major providers of process management software are for example: SAP S4/Hana, Microsoft, Oracle, Infor and many others. (This list is of course not complete)

All systems claim to be able to control a company (enterprise). This from the initial material requirements to logistics and payment transactions is mapped in an ERP system. Numerous extensions such as customer acquisition Customer Relationship Management (CRM) to simple requirements in document management (DMS) have then been further developed.

Do You Have a Question?
Book a Free Web Meeting with One of Our Experts

Process Management Software: A Comparison of the Best-Known Providers